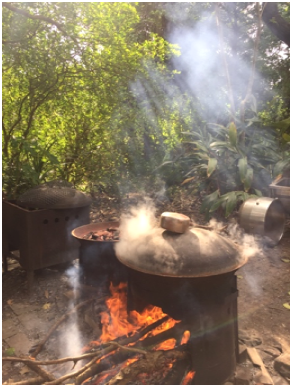 Final Report of a 6-month journey by HOW, Yu Wen Vanessa (Singapore)

Slightly more than 2 years ago, a girl from a cosmopolitan city packed her bags, took a plane, and landed on the shores of Japan. The girl had spent all 18 years of her life in Sunny Island Singapore, and most of her time indoors, where she escaped from the unforgiving heat that scorched her skin till it turned red. To say that the girl was excited to explore the grand nature that can be found in Japan was an understatement. Sure, her country is pretty green, thanks to city planning. However, she has never seen nature to a scale bigger than that of a big outlet mall. Therefore, she knew that once she reached Japan, she would travel to sites where nature was available; a break away from the busy city-lights. That girl was me. 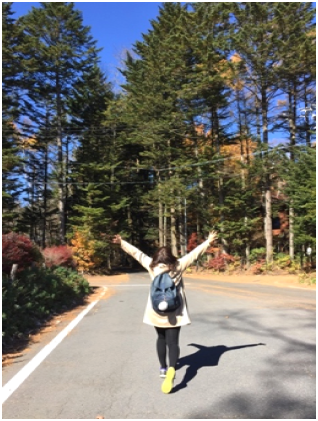 Here I am 2 years back, trying to get in touch with Nature

Although it seems really utilitarian, or even hypocritical, back then, despite taking from nature its nice air, the breathtaking sights and not forgetting, its delicious food, I never felt a special relationship with nature. Was it because I have grown up in an environment where nature never played a prominent role, but was only there for decoration? Nonetheless, the nature I knew was not something I related to myself, but something irrelevant to me. I knew that the Earth was changing (yes, I do think that global warming is real), but if you would have given me a list of problems facing our world today, I (and I believe many others too), would have ranked the Earth on the list of our priorities. How ironic, considering that if not for the Earth, where else would we have to go? Would all our current problems even exist, should the Earth become unlivable? Not knowing what to expect, I took this class because firstly, I wanted to see Okinawa. Secondly, because I wanted re-evaluate the way I have been looking at nature, with more guidance and perspectives.

Sustainability, always felt sort-of like a fad to me. Perhaps it was the way we have come to corporatize even this term. Nevertheless, doing it first-handedly was an eye-opening experience. We learnt about permaculture, and we even tried making fertilizers from ingredients you would least expect: tea, coffee, and okra powder! Using everyday household items really stood out to me, as it showed me how sustainability could be nearer and more relevant to our lives than we expect it to be. 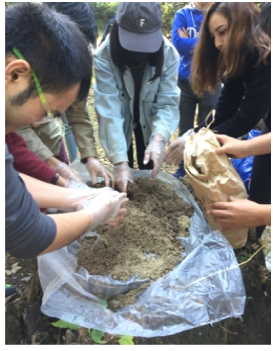 Never thought that fertilizers could smell this great!

Next, we went over to Yuigahama beach, a destination popular for both locals and tourists alike. Before that however, we had interviewed people from our campus, on whether they thought that there would be trash on the beach. Surprisingly, many said no. If anything, they also pointed to the lack of rubbish-bins as the main culprit. The answers we got from interviewing people on the campus really struck me. Have we, as a society, really come to a point where we start becoming selectively ignorant to the dirty footprint that we have left behind, and do we really believe that administration is the only way to get people to be more responsible?

Going over to Yuigahama beach proved my fears right; the trash there was in plain sight. It was quite hard to ignore the presence of the trash, although it was already Fall, and there were less people on the beach. However, the power of selective perception is really potent. Interviewing the people there gave me similar answers; there isn’t trash (although it was right in front of us), the birds did it, the sea washed the trash in, we need more administration.

I went home with mixed feelings that night, perplexed over how willfully ignorant people can be, and how maybe, I was one of them as well. Sure, I may not litter. But surely, my consumption habits or something else could have indirectly contributed to this, … correct?

This is perhaps the part I find hardest to write about. There is simply just too much to say, without losing you, my reader, along the way. Since it is said that a picture speaks a thousand words, I’ll use pictures, amateurishly taken by my smartphone, to aid me. 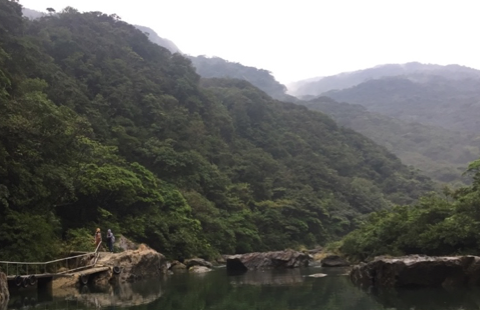 Water, air, plants, mammals. All a part of this majestic eco-system.

Locals are still split over the naming of this place as a UNESCO eco-park.

Some are worried that this would corporatize and pollute the spirit that keeps this eco-system going. 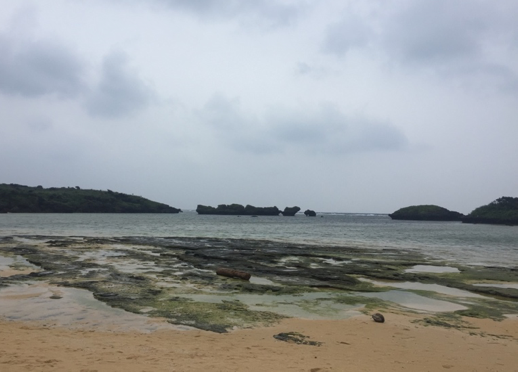 All the time, I never thought beaches could be this pretty.

The beautiful gradients of the water, the undisturbed sands.

Note: another beach that we went to was quite heavily littered.

Administration is one thing, but how affordable and sustainable is this really?

The trash is not even created by the locals of Iriomote. 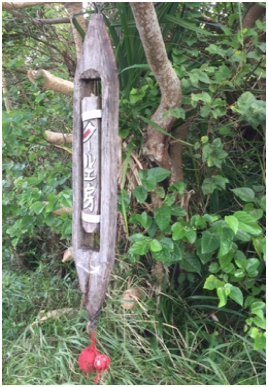 Kurukobo: welcomed by the hospitality of Ishigaki Kinsei and Ishigaki Akiko,

As well as their interns, both from within Japan and internationally! 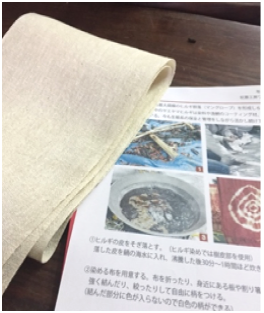 Hands-on activity on dyeing our own textiles, made entirely of natural ingredients.

This was made with seawater, plant fiber, as well as dyes from mangrove roots.

The dyeing process and the beautiful sunray. 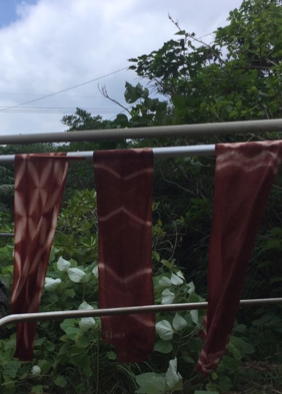 The beautiful patterns that came out of this! 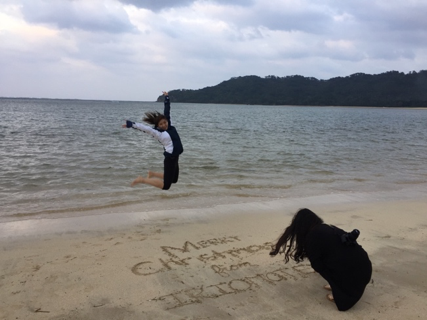 Find me a beach where people can jump freely,

without worry of stepping onto something hostile.

This trip was something I really needed. I was feeling really stressed from the material chase in the city, and it was getting harder for me to believe that there were things that mattered more than simply chasing after things. Looking at the locals of Iriomote, and how proud they are of their homes, and how protective they are of it, made me envious and perplexed at the same time. Envious that they felt such a sense of belonging to their homes, and that to them, home was built on inclusivity and co-existence. Home meant the mountains, the water, the boars, the Iriomote cats, and humans are just part of that bigger picture. It was a refreshing perspective. Humans were not at the top of the pyramid, but rather, just a component of the bigger circle. On the other hand, I felt perplexed over the invasion of foreign elements whom may post a threat to the sustainability of the island.

I should mention here that no, I do not think that foreigners (people not from Iriomote) are a threat and thus they are unwelcome. Rather, what I am trying to say here is that foreigners with the mindset that nature is a tool to be used by humans, may pose a potential threat to the island. If big resorts and fancy streets are not what the locals desire, I believe that they deserved to be heard and respected. Foreigners are welcome if they do not intrude and impose their own ways of thinking. As the saying goes, when in Rome, do as the Romans do. Who are we to come and capitalize on their beautiful beaches, to claim that we are here to enjoy the nature of their islands, when our actions may lead to the destruction of their island itself? Already, the locals are battling the problem of how their rivers and seas are polluted, or how there has been an increase in the number of endangered Iriomote mountain cats who have been killed by road accidents.

When I interviewed Ishigaki Akiko, she said that she had turned down medical corporations who have asked to learn her methods of making indigo, as she thought that the mindset that they came with did not match hers. Conversely, foreigners whom have asked to intern under her were welcome, as long as they had the correct mindset. To her, she was not desperate to pass down “traditional skills”. It was more of the mindset that mattered to her. The mindset of how we need to see nature as a bigger part of ourselves, as a home that we all have to protect, and that nature owes us nothing. One phrase that she said really struck me. “自分が自然に溶けてゆく。技術はその後につく”, meaning that once we find ourselves melting into nature, the necessary skills would find their way to us in only a matter of time.

I came in with my own set of biasness. I was under the wrong impression that the people of Iriomote would lament over the depletion of their culture. This was not the case. It was their way of thinking that they want preserved. Everything else would only come after. The people of Iriomote are not helpless people whom are waiting to be saved. Already, they are trying what they can to protect their way of thinking and living, both publically and personally. Talking to them made me realize the importance of engaging them in our dialogues. We cannot speak for them, but we can speak to them, to understand what they want and gain new perspectives to augment our limited understanding of this vast universe.

The conversations, discussions and field-work that we have gone through for this entire semester has enlightened me to how our current thinking of nature and the environment can differ according to the cultures we were brought up in, and the implications of how our way of thinking can affect our nature and environment. It was indeed a topic very worth exploring, and I am grateful for the opportunity.

With this, I would like to thank the people of Iriomote who welcomed us so warmly, the teachers from both Waseda University and outside, who guided us in this journey of rediscovery, as well as the Uehiro Foundation for their undying support to this wonderful program.