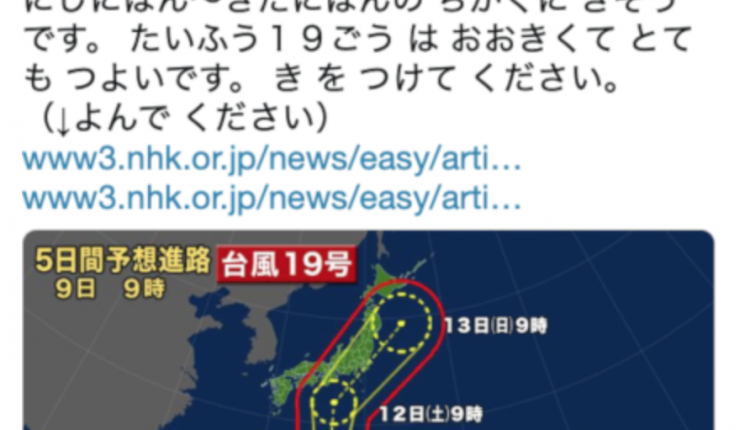 On October 19, 2019, Tokyo was in complete standstill, anticipating the effects of Typhoon Hagibis, the strongest typhoon to hit Japan in years. Groceries and convenience stores were wiped out; trains remained empty or were suspended; no one dared to leave the safety of their homes. In response to this, Tokyo and its wards issued emergency warnings to all citizens in Japan.

However, my group and I questioned these emergency warnings and their effectiveness, especially towards foreigners. Recently, foreigners living in Japan have been increasing every year, yet we noticed that Japan – although trying – cannot adjust as fast as they are coming.

The following are the summarized responses of the interviewees. We interviewed foreigners from different parts of the world. These countries are Singaporean, Saudi Arabia, The Philippines, South Korea, USA, Taiwan, and France. 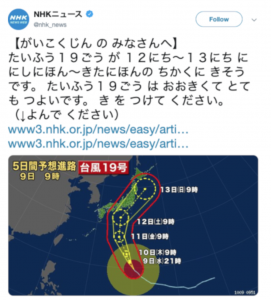 Question 1: Where do you live? Which ward?

Question 2: Before the typhoon, did you do any preparations? Were these preparations recommended by the Japanese government or other ministries?

Singaporean: I did not preparations at all. I was with my dad in a hotel in Shinjuku, fortunately, he was there to take care of me.

Saudi Arabian: I was not aware until a Google pop-up showed in English, warning me about the upcoming Typhoon. I have already made preparations beforehand in case disasters like such will happen. For additional preparations, I stocked up with lots of food and water.

Filipino: I prepared an emergency bag and stocked up on food and water. These were recommended by the Japanese government.

South Korean: I didn’t do anything since I always have enough water and food ready.

American: I bought a ton of instant noodles, yakisoba, soup. I don’t think it was recommended to me, but I just did it since I saw the news of the destruction and threat that the typhoon posed.

Taiwanese: I tried to stock up on food and canned goods. I’m not sure if the government recommended this.

French: I did not do anything at all.

Question 3: What did you do when Typhoon Hagibis arrived that Saturday? Did you stay at home?

Singaporean: I stayed with my dad at the hotel in Shinjuku.

Saudi Arabian: I stayed at Shibuya with a friend that spoke the same language as me. It made me feel safe knowing I was not alone and with someone who I could communicate easily with.

Question 4: Did you receive any emergency alerts?

Saudi Arabian: I decided to look for information about emergency alerts during the typhoon myself in English; through Google, and also looked for names and places of schools nearby just in case I had to evacuate.

Filipino: The evacuation alerts sent via mobile phones were effective but I think because it is only written in Japanese, foreigners in Japan struggle to understand what the alerts were about.

South Korean: I went through looking and updating myself with the emergency alerts in Twitter and Instagram in Japanese.

American: I actually did, I think it was effective in the sense that it made me get ready for the worse. It was also reliable and easy to understand in my opinion.

Taiwanese: What? I didn’t know there was an alert.

French: It was mostly in Japanese so not that effective for foreigners.

Question 5: From 1 to 10, please grade the Japan emergency procedures:

Reliability ( was the content accurate or helpful to you?) 1-10

Understandability: 0.5 Not mentioned in English at all.

Reliability ( was the content accurate or helpful to you?) : 7

Understandability (Language etc.) :   3 I can understand the emergency kanjis like earthquake （地震）and I would know immediately that it’s talking about an earthquake.

Effectiveness (Enough alerts, speedy communication, etc): 4 because we had to search exactly where to go for evacuation but there were no maps at all.

Reliability ( was the content accurate or helpful to you?): If we had to depend on wifi when we need connection I would give it a 4 due to the lack of information and myself unable to understand Japanese well. However, if we didn’t have to rely on wifi, it would be a 6.

Reliability ( was the content accurate or helpful to you?) : 9

Effectiveness (Enough alerts, speedy communication, etc) : 10 It’s most important that in the end, we were safe and didn’t get harmed even by the lack of information.

Reliability ( was the content accurate or helpful to you?) : 9 because sometimes the information was not concrete enough. They were stressing water outage but it didn’t actually happen in the area that I am living in.

Reliability ( was the content accurate or helpful to you?) :  8

Reliability ( was the content accurate or helpful to you?) : 8

Reliability ( was the content accurate or helpful to you?) : 6

Question 6: How do you think the Japanese government can improve to convey important messages to foreigners?

Singaporean: It would be great to at least announce information in English for foreigners; even keywords in English that may be important.

Saudi Arabian: It might be vital to depend on something more than wifi (through SNS etc). Send alerts in the most common languages in Japan which may be Japanese and Egnlish through big screens in TV. If there are only Japanese in the screens in times of emergencies, we can’t comprehend but it’s better if it’s familiar to us by displaying information in English or other major languages that are used in Japan.

Filipino: I believe that putting both English and Japanese would help a lot in regards to important messages or offer the option to view the message in their native tongue. I believe that Japan’s emergency response is effective but would be even more so if they offered it with more languages that could help foreigners. With only Japanese, plenty of people may be in a dangerous situation if they were not able to understand the alerts sent out.

American: Increasing the number of alerts said in foreign languages (not only English) would help. Also just using pictures and illustrations with maybe English words would be helpful instead of kanji. But I would say that the number of news channels talking about the hurricane news was sufficient enough for foreigners to understand that a hurricane will come so stay safe and evacuate if necessary. But I think this worked out because of the huge preparation time before the hurricane actually hit. If it was an earthquake or tsunami or something more instant, there definitely should be a more efficient way.

Taiwanese: Using English may be a vital option to use to convey important messages to foreigners. It creates a difference whether you use English or not in times of emergencies.

French: Give information in English, use easy Japanese and images as well but using hiragana doesn’t always mean easier Japanese too.

Question 7: Based on Japan’s emergency responses, would you say the way of living in Japan is ideal for foreigners? Please explain.

Singaporean: Yes, it is still applicable despite the language; instructions aren’t hard to understand since there are crowded —  if it was actually serious, there are crowds you can follow; procedures will always be given.

Saudi Arabian: Language barrier is the biggest problem because it affects way of living and you can often feel you cant improve, which is not convenient for non-Japanese people at all and is very limiting. I just got lucky with finding the emergency procedures online and from friends,  but at least to help, visuals would be better than everything in Japanese. I think the system is made with the mentality “we will not make u improve.”

Filipino: I believe that opening a multilingual option would benefit many foreigners who currently live and reside in Japan and especially those who are not fluent in Japanese.

American: No big struggles. I can speak and read Japanese so it’s much easier for me to live in Japan but even if I wasn’t fluent, I think Japan does a good job translating things in other languages. Although of course more rural areas compared to metropolitan/tourist areas have fewer translations for foreigners. But I don’t think it’s perfect yet but I think it will come to attention and improve as Japan heads into hosting the 2020 Olympic Games.

Taiwanese: It’s not that bad, I think it’s okay but it would be great if there were more information in other languages as well for those who don’t understand Japanese. But to be honest, more specific information in English would help.

French: I think having a basic skill in Japanese is a requirement to live in Japan but in a long way, a lot of information is still displayed only in Japanese, even in Tokyo.

Singaporean: Nakano has the big horn/speaker to broadcast in times of emergencies; if they used that to announce in English, it would be a lot more effective.

French: Some trains in Japan still don’t have an electronic board with the name of the stations written or English announcements, which can be confusing.

Based on this interview, one thing we realized is that the Japanese government is very dependent on power to communicate to not just foreigners, but to the whole nation as well. So if you do think about it, it’s not very sustainable, and additionally, barely effective towards foreigners, especially the ones who cannot speak Japanese. The governments use the emergency alert on our phones and the large loudspeakers, but not everyone receives it. If it could reach everyone and everyone is able to understand, then the usage of power could be more justified.

Additionally, during times such as Typhoon Hagibis, Japanese and foreign citizens tend to over-buy or panic buy to prepare. They are also more inclined to buy items for one-time use such as instant cup noodles, water bottles, and such, which creates a drastic and negative effect on the environment. There must be a different way to be prepared for emergencies while also being environmentally sustainable.