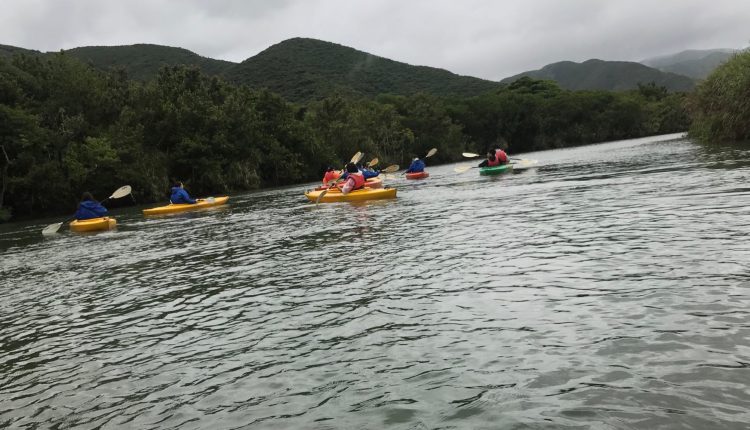 People Living in Harmony with Wildlife and Culture 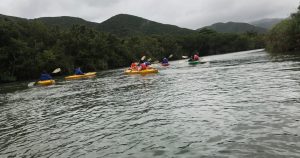 From June 15thto 17th, we had a trip to Amami-Oshima to see how local people coexist with its nature and what problem they are faced with.  It was full of discoveries that I’ve never known before. I love attitudes of islanders that they respect wildlife and people and always feel grateful for every chance to meet them. Here at the center of Tokyo, the fast-paced life sometimes makes me feel disconnected from nature. However, I got a sense of unity with it during my stay in Amami.

What impressed me most during the trip were people, wildlife, and culture in Amami-Oshima, which has developed its own distinctive biodiversity and traditions in the long history because of its characteristics of natural features and sub-tropical weather. The way those aspects are interdependent on each other, the sense of belonging to each other, is what we lack in a current daily life.

In this essay, I look back on the experiences that we had on the island and describe the most impressive characteristics of it focusing on people and wildlife, compared with the life we have in Tokyo.

I was really moved to see how much people living in Amami think each encounters with other people as important even if with visitors from outside of the island. The first dialect I met in Amami, used as Hello in English, うがみんしょうらん, expresses greatly about their warm attitudes towards others. That phrase comes from old Japanese that contains the meanings of respect for others. Another example, the phrase, とうとがなし, that means “Thank you”,  also shows respect even more for other people than to oneself. Both are rooted in Amami-people’s mind deeply inherited from the past. (*1) 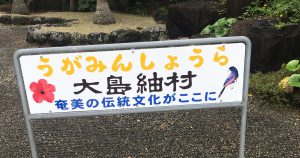 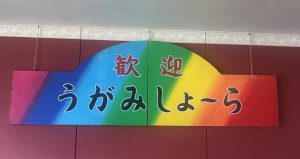 Finally,  the sky cleared up on the final day, we went to a beach which commands a magnificent view of the ocean. However, I went to see a farmer whom I saw on the bus while others were swimming in the sea. She is running her own field to live on the harvest and to share with her neighbors. Although that was of course first time for both of us to meet and talk each other, she accepted me pleasantly and answered my questions for a while, which made me feel comfortable and come back to Amami again in the future. 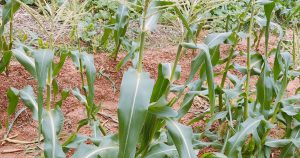 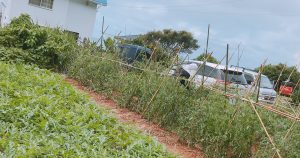 In Tokyo, however, we at the center of Tokyo, tend not to have such relationship but just hurry to get on a packed train every day of life, which may eventually cause us not to feel belonging to the community. Thus, what I saw about interaction among local people in Amami, a part of traditions that roots in their hearts, should be our model to form a community. I believe we are able to make better one even in Tokyo so that all of us can live in comfort.

【INTERACTION BETWEEN PEOPLE AND WILDLIFE】

With an ocean of forest, the sea around the island and warm climate, people have benefited from them while they have preserved them. During the days I spent there, I was amazed at what a unique ecosystem it has and how local people treat it well. 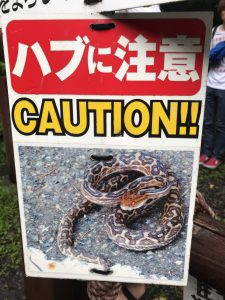 As a first unique example, there are one species of snakes, called Habu, that has a deadly poison enough to kill animals and even human beings. (*2 thanks to the development of the medicines, no one has been killed since 2004 in Amami, except one male who was in his 50s in 2014) Before I came to Amami-Oshima, I thought Habu as just a harmful animal that threats people’s lives. However, local people think not only in that way, even though Habu sometimes hurts people, but also they think Habu as a kind of god that protects wildlife (*3), Habu is actually on the top of its food chain. Because of the poison that it has, it prevents people from invading forests from the past and as a result protects the wildlife.  Thus, people respect it and at the same time are awed by it. This relationship between people and Habu creates an environment where they can co-exist.

The second impressive thing in Amami is that they are trying to consume as many resources as possible mainly foods. On the final day, we had a lunch at a restaurant close to the beach and ate really gorgeous food that keeps original taste of its ingredients. In the restaurant, I found some signboards that say they promote to consume local materials within the local community, 地産地消. Furthermore, there are other shops that also promote it around the restaurant. One is a souvenir shop and the other is a factory that makes brown sugar and its processed products. When I when to the factory, I could see one procedure of melting brown sugar made of sugar cane in a huge pan. 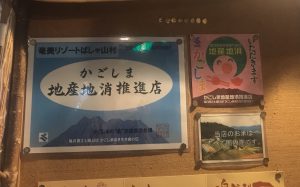 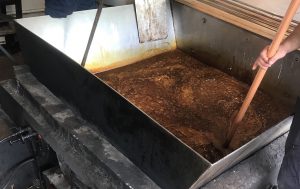 Consuming local products enables people to enhance a sense of belongings to the society and might help to feel it close and cherish it. Thus, I felt jealous that Amamians are able to use their own natural resources. That is what we partly lack in a city life here in Tokyo since there are the few that produced in the community but basically from around Japan or even from overseas.

In the current world, people are getting more concerned about plastic trash spread out to the ocean that brought about deaths of sea animals. When I went to the beach, I focused on it, how much amount of plastic trash are there thrown away and where they are from.

The Amami-beach impressed me positively contrary to the one that we had in Kamakura-beach. There was almost no trash on the seashore because, I suppose, of tremendous efforts by the local community. The signboard at the beach said nobody is allowed to bring food and beverage into the beach area, that effectively reduce the amount of trash thrown away on the shore. On the other hand, I barely found some plastic trash that includes cans of beer from Japan and the one comes from a Chinese spoken country. One lesson I got from this fact is that even a piece of plastic we throw away in some way might have effects on not only Japan but also somewhere in the world and its wildlife. 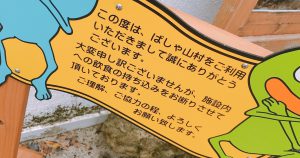 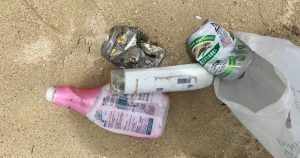 We live in a country known for using plastic too much. It is a time for us to sense responsibility to think seriously about plastic pollution, otherwise, we cannot take the notorious label off.

Every after I have especial experiences outside of my ordinary life, I realize how tiny the area where I usually live is and things I take for granted is not always true to someones. This time I was thankfully given a chance to learn many things that I did not know before the trip. I am really grateful for it but at the same time, I feel the responsibility imposed on me that I should deepen this knowledge more and let others notice or let them be aware of it. Many people believe that we cannot really understand the truth of any issues until we see it through our eyes, touch it by our hands, taste it by our tongue; until we think it closely to ourselves. Once we know it, that is the start to make actions no matter small it is.