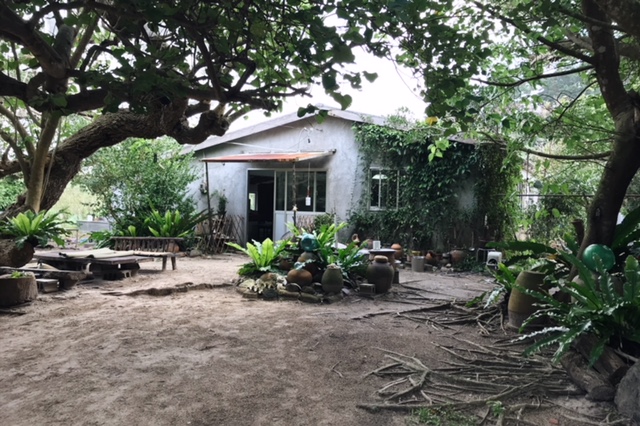 The main field trip for this course was the trip to Iriomote Island, Okinawa second largest island. I have never been to Okinawa before, but my image of Okinawa is clean and beautiful beaches with a very different type of food from the mainland, including the famous Goya Chanpuru dish which was pretty much the only Okinawa food I knew prior to the trip. I did not acknowledge how far Okinawa Islands are away from the mainland Japan until I realized how long we had to travel to get there. Iriomote Island was so much closer to Taiwan than the mainland Japan. We had some lectures on the Iriomote Island for what it is known for and its history before going to the place, so I realized that it will be a very remote place, yet still, I was still very surprised of how rich in nature Iriomote was when we arrived there! I do not think I have ever been to a place that remained untouched by human hands and not being replaced by infrastructures like this place before. Even though all we could see from the bus ride, which took us on the only road on the island, was only trees, sea, and some animals, I was very fascinated and was eager to learn more about what this place has to offer. 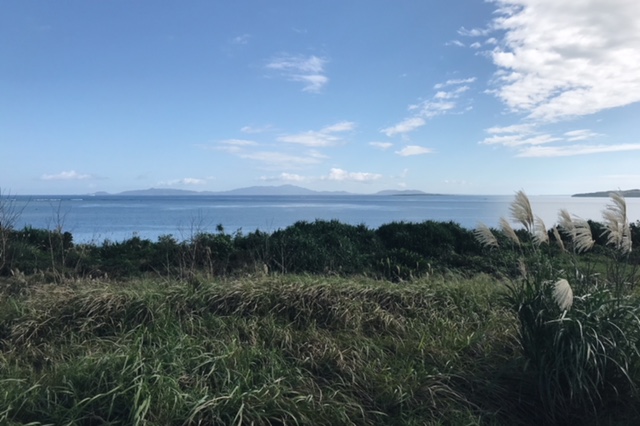 Our main theme for the course, as well as the trip, was “Thinking about the environment through culture”. I had a very vague idea about the correlations between the two concepts, but in reality, culture comes from the environment, just like what Mr.Kinsei had mentioned in the interview we did over dinner one night. “When nature and humans come together, it creates culture, and we depend largely on nature”, he said.

Our first task in the field work was beach-cleaning. Prior to the trip to Iriomote, we had gone to a beach in Kamakura before, and even the amount of trash we found there astonished me. However, the trash that was lying on the beach we went to in Iriomote, was so much more. We collected two-full-huge garbage bag of plastic bottles in the 10-minute-time span. It was so depressing to see the beautiful beaches being ruined with all the trash being washed up from the sea. There were mostly bottles, but also other things that you would not expect to find, for example, light bulbs and shoes. 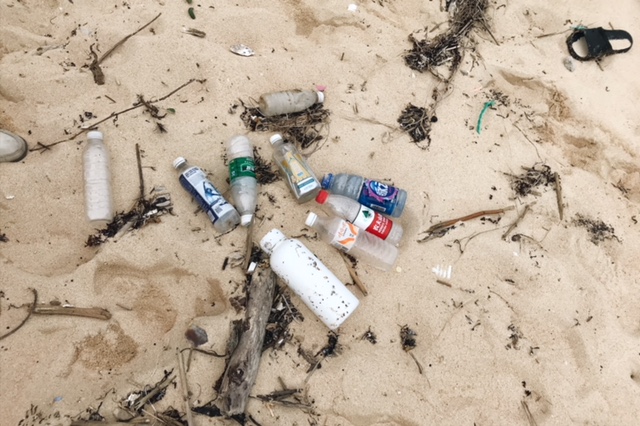 Trash we found lying on the beach

We later classified the origin of where those bottles came from by looking at the barcodes, which implied the countries it was being produced in. They mainly came from East and Southeast Asian countries. I initially was very confused where the trash came from since there are only 4,000 people living on the island. However, I later learned that the tsunami was the main factor washing the bottles down to the sea and they traveled for a long time, and eventually washed up at some beaches. It is frightful to think how powerful the nature is that it took away numerous lives in just a blink of an eye and still left side effects with us even after the time has passed. I think it is almost impossible to prevent these natural disasters and that there is no one to blame for those bottles being washed up on the beach. Even though, no one deliberately threw the trash into the sea, or even if someone does, it is definitely not them who caused these problems, we humans are still responsible for producing and intoxicating our own planet. 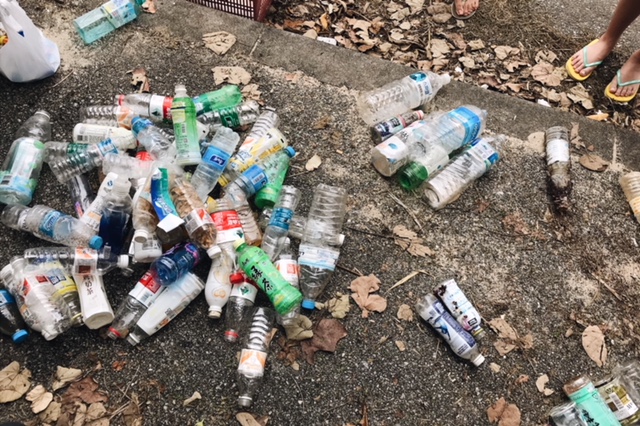 Unfortunately, the weather was very bad and it kept raining all day, so instead of the original plan to kayak in the Urauchi River while exploring the mangroves, we boarded the boat. Urauchi River is the longest and the largest river in Okinawa Prefecture, according to the guide. He navigated the boat and stopped at spots where there were important mangrove species or important history. There were several villages scattered in the area, but due to a huge flood in the 1960s, the villagers had no other choice but to abandon the place.

We later revisited the secondary mangrove forest where we all paired up and kayaked through the river this time. It was called the secondary mangrove because, according to the local people there, the primary mangrove was mostly destroyed when the coal industry entered.  At one spot where we stopped to get down and walk to the spot where the remnants of the old coal mine were left to be seen, we could see the remains of the bridge where trains used to run when the mine was being operated. There were also many alcohol bottles left in one area. I later learned that there were a lot of migrants who came to work in the mine believing that they would receive high compensation in return to support their family living at other places. However, once they came, there was no way to leave. The compensation was not in the form of money, but it was in form of food and accommodations and tickets for other privileges offered on the island. The hope they had of sending money back to their family faded away. Some tried to escape but because the forest was untouched and so dense that they got lost and could not find the way back out. The place had so much history and tragedies, that I even felt uncomfortable as if there was something stuck in my throat that I could not really swallow.

The following day, we went to Kinsei-san’s workshop. There, we learned how to dye cloth which was made from banana trees with a natural dye that was being extracted from tree roots which give a reddish color. At the workshop, we were able to design our own fabric using chopsticks, rubber bands and some nuts to create a pattern. Kinsei-san said that the way to conserve and sustain these plants they use for the dye is to not overuse them. “Taking only the amount we need, so they could still continue to grow”, he said. They also use the opportunity when the trees are being collapsed by the storm to take them back from the forest and store them so they could use them in the future without having to actually cut down new ones. 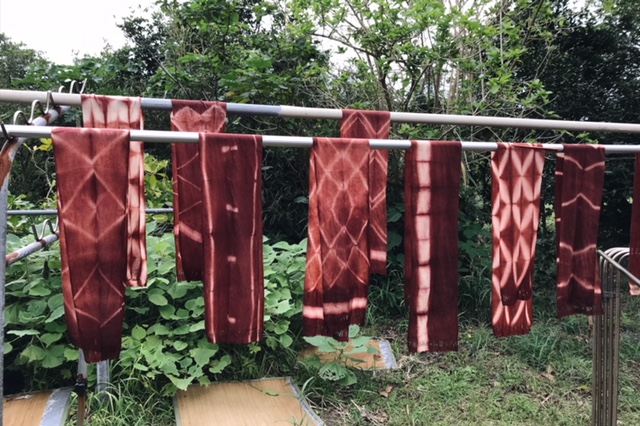 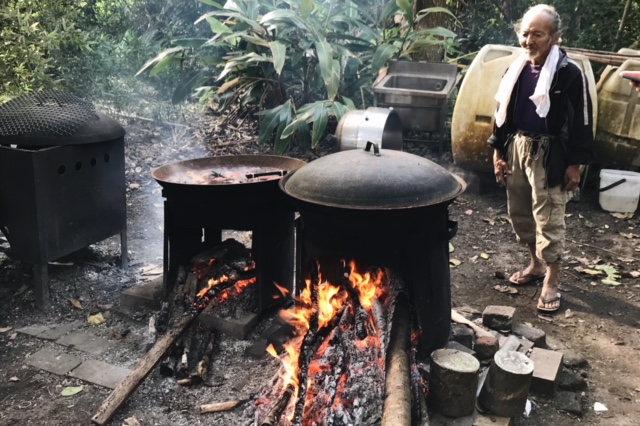 Kinsei-san is guiding us through the dyeing method

The workshop was not only an enjoyable experience but also a very educating one. I really like the atmosphere at Kuuru Koubou. It was very peaceful being surrounded by trees and chickens running around in the yard. I have always had a dream of having chickens in my backyard so that we could always have fresh and organic eggs and Kuruu Koubou inspired me even more.

Iriomote is known for having ‘yamaneko’ or wild cats which only live on the Iriomote Island. The number of the wild cats is only around a hundred left, so people on the Iriomote Island are putting all their effort to conserve the species. A car accident is one of the biggest reasons that are affecting the number of the cats. Drivers have been asked to be more careful when driving to avoid hitting the cats and signs have also been put up to warn the drivers and it works for only when they first put up and people start ignoring again. They also made a tunnel for the yamaneko so that they could avoid the road and cars, and consequently minimize the accidents. Since Iriomote Island might become a world heritage in the future, they must come up with stricter measures to conserve the yamaneko and also other endangered species.

Iriomote Island has been nominated for UNESCO World Natural Heritage Site which will be judged in this upcoming summer 2018. If the island gets its UNESCO approval, it will face many changes. Not only the local people will not be able to live as peacefully as they did before, but also the rich nature that Iriomote has might be ruined, instead of being conserved as Japan’s original plan when nominating it to UNESCO. There will be more visitors to the island, and consequently, more problems with garbage and investors will seek the opportunity to construct accommodations. In the interview with Kinsei-san, we asked for his opinions about Iriomote becoming the world heritage, and he showed his worries. He said that if the island is to welcome more tourists, there must be established rules for guides who are taking them here. Those guides must pass a test in order to become a guide in Iriomote Island. This probably needs to include an ethics test, so that only those who are responsible tourists can visit the island. If Iriomote is to become a world heritage and to be promoted as a tourist destination, it would need to be in terms of ecotourism where people come and learn about the culture and nature.

Conclusively, this trip was an eye-opening experience. My image of Okinawa as being the touristy spot has completely vanished. There are so much more problems to take in concern, including the environmental problems and the effects on local people’s lives. Despite our main focus of the trip around the environment, we also learned about a tiny part of Iriomote culture which I am certain there is so much more I could learn about. The connection between the local people, the forests, the sea and the nature is something very special. Having lived in the urban for most of my life, it brought me to a realization that I am taking things for granted. I am so used to the fast-moving pace of the city and the ‘convenience’ that I do not really think about the environment and how to protect ‘our environment’ as much as the people in Iriomote do. The beach-cleaning activity particularly shone light on me that we are producing so much waste and that we are destroying our own home without thinking. As Iriomote might become a world natural heritage site and there will be many consequences and problems to take action. Even if it does not become the world heritage, Iriomote is also facing its own problems. It is not only the problem of Iriomote people but everyone’s, because Iriomote is also part of ‘our home’, our planet that we all share.