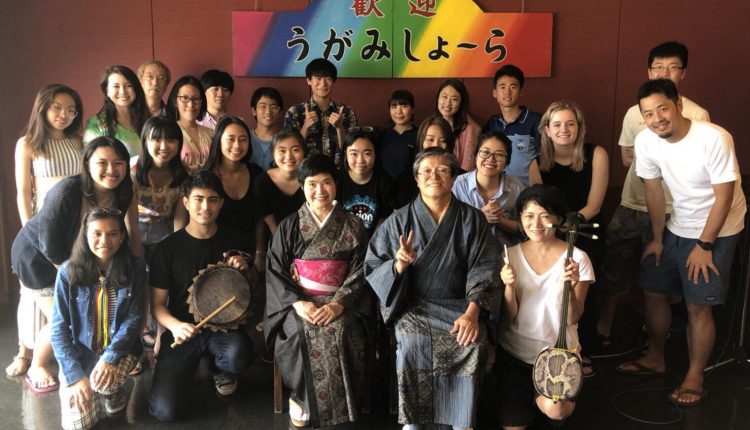 Located south of Kagoshima, Amami Oshima is an island surrounded by cobalt blue seas and a tropical climate. The island is covered with luscious green forests and is popular for a number of endemic species of plants and animals as well as its highly valued textile which is rooted deep in its tradition. On the 15th of June, we had an opportunity to visit this beautiful Island as part of Waseda University’s Nature and Culture class which was funded by Uehiro Foundation. We had three days to explore Amami’s beautiful natural world, culture and the various issues surrounding it.

The class was divided into three groups, and each group was given a specific theme to study during the trip. Our theme was ‘ecological smart life’, for which I was responsible for Amami Oshima’s traditional music and dance i.e. Shima-uta and dance. Being from a landlocked country I had no experience with any kind of islandic culture, so I was eager to see Amami Oshima’s form of traditional shima–uta and dance.

Having once been a part of the Ryukyu Kingdom, Amami’s culture varies from that of Kagoshima and mainland Japan. Shaped by the distinctive history and lifestyle of the area, shima–uta is a blend of culture and musical tradition unique to the Ryukyu region. Songs are usually sung in pairs of two, usually one of each gender, and is performed in a call-and-response structure where one person sings a verse after which the other person sings their part in response. The song is accompanied by the “samisen’’, which literally translates to three strings and is a type of stringed instrument peculiar to the Amami islands and Okinawa. ‘Chijin’ a type of small drum also used for percussion.

We were very fortunate to have Fukuyama-san and Taira-san perform for us on our final day at Amami Oshima. The pair performed a few pieces, to which everyone listened attentively, in awe of their distinctive style as well as their vocal range. For their final song, we had the opportunity to do a traditional dance that was taught to us by Taira-san. The steps to the dance were fairly simple and looked like they were meant to mimic activities of everyday life, or even a representation of natural elements, like the swaying of tall grass in the wind or ocean waves. The lyrics to the songs themselves are in a way, messages by which people communicate their way of life and valuable lessons on to future generations. 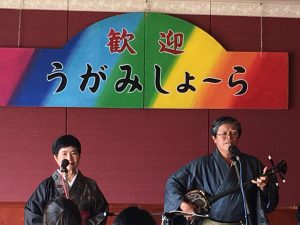 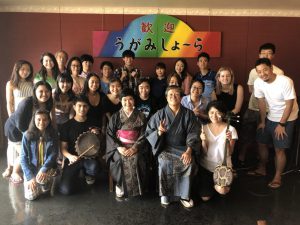 After their performance I had the opportunity to talk to them and ask them some questions related to the island’s musical practices and how it has been fairing recently. I found out that while interest among youths have been declining recently, the musical tradition has proved resilient as the practice has been supported by a strong network of performers, teachers, audiences and other advocates for the past few decades. For the past few decades its sustainability has been mostly autonomous, relying on the island’s community rather then outside initiatives. Both Fukayama-san and Taira-san have been supporting the islands tradition by teaching music or performing in competitions in hopes of keeping the tradition alive.

But it seems the way of shima–uta education, promotion and even concerts have changed into initiatives by voluntary organizations either for commercial gains or just to keep the tradition alive. Furthermore, the way this artform is appreciated has started to change as well, as more artists are using digital media to widen their reach and adapt to a new generation. While these changes are necessary, it might have negative effects performance practices as well as how the performances are evaluated.

The trip has been an important learning experience for me and has allowed me to dwell into this island’s rich culture and explore its unique musical practices which are rooted deeps in its tradition. It was interesting to see how music can have such a huge impact on a region’s cultural identity and why keeping such traditions alive is so important not only for the present generation but for the ones to come.

Amami Oshima: An intersection between nature and tradition Nozomi Fujii