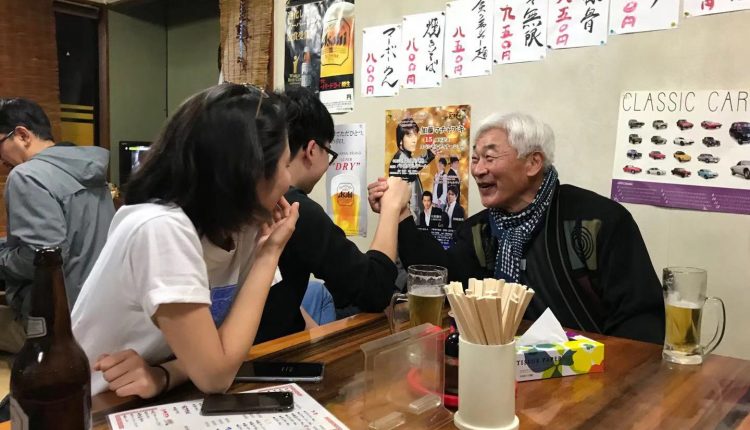 The topic of my group at the symposium was “grassroots”. By grassroots, we mean our relationships with nature, especially that of children. The goal of our presentation was to analyze the current problems of grassroot awareness and to suggest what should be done to have a better future.

Reflections on our relations with nature

One of the current problems we highlighted was that nowadays children spend less time in nature than previous generations. In our presentation I asked the audience when was their last time hugging a tree. For me, my first time hugging a tree was around 5-year-old during a family trip. Then, I have not hugged a tree anymore. At the symposium I was not surprised to learn that I am not the only one.

The lack of popularity of nature among children is rather obvious over the course of this class. On our field trip to Takahata, I realized that there were almost no teenagers or children on the farms or even in the whole town. When we visited the organic farm in a car park of Kamakura, I realized the participants in the organizer’s Facebook group were mostly in their 40s, too.

Why did so few children participate? A major reason is that children are more inclined to do what is perceived as “cool”. Being cool or not is not judged by yourself, rather, it is as perceived by your peers. Children value peer recognition much more than anything else. Coolness is not a new concept, but the rise of social media in the 2010s magnified the influence of coolness. To learn about what is perceived cool, we just have to see what people like to show off about. I checked the instagram posts of my fellow classmates in this “Nature and Culture” class. Many posted on instagram about newly bought clothes, which is cool. Many posted about having a meal at a o-sha-re restaurant, which is also cool. Posts about nature? Almost none. If you ask Japanese children to use adjectives to describe “going to nature”, the answer is usually fun or relaxing, but it is never cool.

Why is nature not cool? Nature, by definition, must be situated in 田舎, so “nature” is often a euphemism of 田舎. The Japanese media tried very hard to push the narrative that “田舎 is just as fun as the city”. A regular theme of Japanese variety shows is to cover the news that “some city dwellers just moved out of Tokyo to enjoy nature”. Sometimes, to blend in more exoticism, the TV programs will report “a foreigner discovered the beauty of nature in the 田舎 of Japan”. All these efforts might help to offset the negative image of 田舎, but this does not make nature a “cool” thing.

My ideas of the solution

If we want to promote a closer relationship with nature, we need to make the children feel cool when doing it. If it is perceived as cool, the children will do it by themselves, without the need of education or government campaign, which is often bureaucratic and inefficient. How? Before the rise of social media, we let celebrities tell us what is cool. But celebrities do not influence us as much as our peers. Therefore, we need to make “closer relationship with nature” a cool thing among the peers of a child. In other words, any campaign that aims at promoting nature in a top-down manner, for example, government-to-people, or teacher-to-students, is not going to work. What we need is a grassroots campaign, a self-generated campaign, which comes back to the topic of our presentation.

What the above paragraph means is, any activities designed to nurture a closer relationship with nature shall not be positioned as a family event. Our parents are not our peers. Children do not value the recognition of their parents as much as their peers. In such “nature activities”, just let the children do their own thing. Let the peer influence work its own way. One might ask, how about the role of teachers and parents, for example, what is the role for our class? It is apparent that our class is not designed to nurture the coolness of nature. Our class is designed to teach children who already find nature cool.

Final thoughts on this class

We only have one earth. This Earth is a shared pool of resources managed by a community of 6 billion people. As the old saying goes, if everyone is managing it, then no one is managing it. This would ultimately lead to the so-called “the tragedy of the commons” (Hardin, 1968), which is a situation when everyone does not take responsibility in the management of the commons and led it to destruction. To develop any sense of care to the commons, we must start from childhood. Make it a cool thing among the children. Expose children and their peers to nature. Hopefully, when they get to adulthood, they would be interested in taking classes like “Nature and Culture” to learn more about the academic aspect of the human relationships with nature.