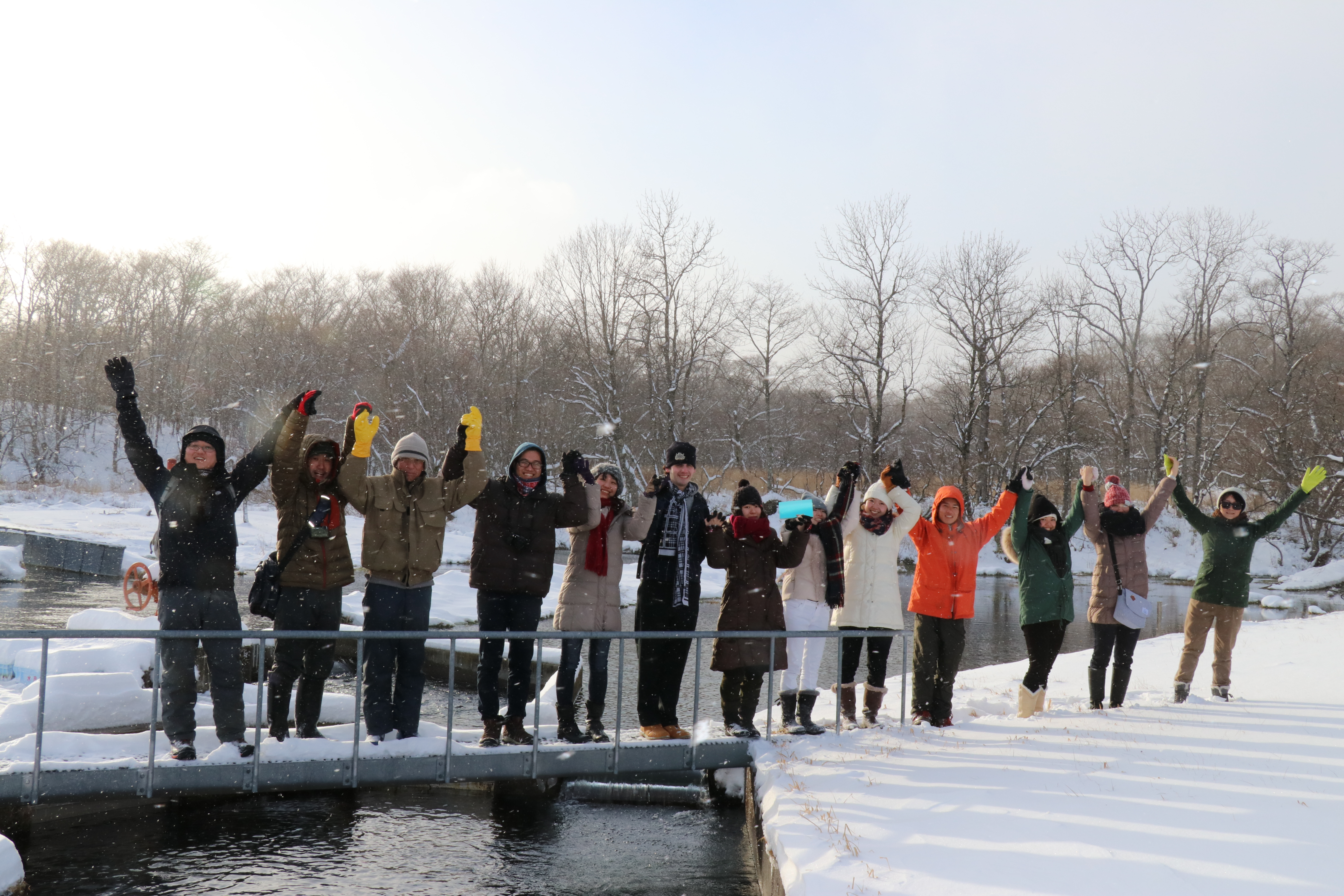 The course “Thinking about the Environment through Culture” investigated ecological and environmental issues through various lenses, including those informed by the humanities and social sciences—but without neglecting the natural sciences. These different lenses helped to create a comprehensive perspective for thinking about the environment, and this perspective was much more than just a method for armchair speculation in the classroom. The professor leading the course and its attendees also visited three geographically varied sites in the field, which spanned two islands of the Japanese archipelago. These close-up views of ecosystems—natural, negatively affected by human activity, and shaped or even mended by more conscientious forms of human action—combined with meetings with local stakeholders. The fieldwork broadened the course’s perspective and perhaps gave participants opportunities to test their assumptions.

The first fieldwork session brought the course to an organic farm in the area around the town of Ogawa, located in Saitama Prefecture. Although the farm is only a few hours’ drive from one of the most populous metropolitan areas in the world, the farm and its immediate surroundings are unmistakably rural in character. Rural, however, is not synonymous with nature entirely untouched by human hands: The assemblage of discrete areas of cultivated carrots, cotton, cattle, soybeans, mustard greens, and more would never be found in quite the same patterns in primordial nature.

Rather, the driving purpose behind the Kanekos, the owners of the farm, is to develop methods of agriculture that still yield the products that humans require from farming but that do so in a way that avoids negative externalities. The soil into which crops are planted is tilled, but the tractor that does so has been modified to run on biodiesel derived from spent cooking oil. Not only does this allow the oil to be used twice, once for cooking and once as fuel, but the carbon released into atmosphere from burning the oil is, in terms of first-order effects, a net zero. The tractor’s fuel is derived from plants that first absorbed carbon from the atmosphere before being burnt and returning that same carbon back from where it came. This exact cycle is found nowhere in nature, but it is clearly informed by the natural cycling of carbon throughout the Earth’s biosphere and atmosphere.

The same concepts of frugality and reuse are seen elsewhere on the farm. Animal waste is stored in an underground pool and anaerobically fermented to fuel a generator. Weeds are hand-plucked from amid the crops—also avoiding possible dangers of using chemical herbicides, such as runoff, exposure by farmers, or excessive levels remaining in shipped produce—and fed to the farm’s cattle as part of their diets.

The way the Kanekos’ crops are distributed points to a need for consumer awareness. One is unlikely to find the couple’s carrots at the supermarket. Instead, the farm’s produce is sold through a system called teikei in Japanese, equivalent to the concept of community-supported agriculture in English. Individual households pay subscriptions to receive their shares of the farm’s agricultural products. This semi-communal approach to farming is echoed by the Kanekos’ invitation to members of the public to work and learn on the premises, rather than merely consuming. It is an open question whether this model could be scaled up to encompass all consumers in an industrialized society. However, even a partial shift toward this way of farming could reduce some of the harmful effects of human activity on nature. Additionally, governmental policies affecting the price of fossil fuels, for example, would certainly lead to greater adoption of biofuels. Legislative and regulatory solutions would, however, require careful crafting. It was noted that it is not always possible for small-scale farmers consciously employing environmentally friendly practices to endure the hassle and expense of obtaining official recognition of their products as “organic.”

The second fieldwork session took the course to Hokkaido, in the north of Japan. In the classroom, the course attendees learned how human activity has disrupted the local environment—even one as relatively vast and untamed as the Kushiro wetlands region that was the site of the fieldwork. Notably, waste runoff from dairy cattle allowed to graze right to the Kushiro River’s edge negatively affected trout populations and the wider watershed ecosystem.

Damage to ecosystems can harm humans’ livelihoods, as well as the natural flora and fauna that some might be willing to sacrifice in the name of economic development. River pollution from dairy farming impacted the local fishing industry. Negative economic externalities are thus one reason why government, local groups, non-profit organizations, and other stakeholders have come together in the area around Kushiro. In the case of watershed pollution, transfer of ownership from cattle farmers to municipalities helped to take steps toward resolving the problem.

In addition to simply ceasing to harm ecosystems, humans are also acting directly to conserve and bring back animal species that have been brought to the brink of extinction. Just as dairy farming to the river’s edge resulted in fish-killing pollution, it also entailed cutting down riparian forests. In these trees nested Blakiston’s fish owl, a species whose numbers in Japan had declined to just a few dozen by the 1990s. Nijibetsu Kor-Kamuy-no-Kai, a local association, plants trees and installs artificial nest boxes to replace the natural hollows of the trees that were felled decades ago. The course also visited a trout farm that operates in part to provide prey for Blakiston’s fish owl. Another bird species almost eradicated in Japan through deforestation but now on the rebound is the red-crowned crane. The Wild Bird Society of Japan, a foundation that maintains a sanctuary at the north of Kushiro wetlands, studies and keeps count of red-crowned cranes, protects and restores their breeding and feeding grounds, educates the public, and feeds the birds corn during the winter.

Direct economic impacts on people and scientific curiosity are not the only motivations that humans might have for preserving wildlife. One stop on the course’s Hokkaido visit was the Lake Akan Ainu Kotan, where the group met with Mr. Akibe. The Ainu, the indigenous people of the Japanese archipelago, traditionally revere the Blakiston’s fish owl as kotan-kor-kamuy—the guardian deity of the village. The aforementioned crane species is likewise revered as sarurun-kamuy—the god of the wetlands. Efforts to preserve Ainu culture, such as the operations of the Lake Akan Ainu Kotan, have coincided with, and lent vocabulary to, efforts to preserve the nature that the Ainu traditionally hold as divine, as demonstrated by the name of the owl-protecting association mentioned previously.

The final trip during the course brought students to Fukushima Prefecture. The group attended a seminar concerning efforts to build a wine industry in the prefecture with the aim of helping it to recover from the 2011 tsunami and nuclear accident. Here, as well, economic considerations and a scientific approach to environmental protection are intertwined: In addition to wine being a potentially lucrative industry, it was noted that grapes do not accumulate significant levels of any radioactive cesium that might be found in the soil in which the fruit are grown.

The following day, the group visited the Fukushima Meal Center, a facility located around nine kilometers from the Fukushima Daiichi Nuclear Power Station. The center prepares and serves meals to those working to decommission the stricken power plant. A monitoring station on the grounds displayed a background radiation level during the visit of around 0.2 μSv—elevated but considered safe. Radiation levels closer to the plant would certainly have been higher.

Nearby, the students in attendance were also driven past what were once houses and train tracks but which had been leveled in the 2011 tsunami. While the area nearby was by no means deserted, and there was even some new construction inland, fears of radiation—both justified and unjustified—likely contributed to the these washed-away areas often not being rebuilt and starting to be reclaimed by nature. In a decades-older and more extreme example of a similar phenomenon, it has been observed that the absence of sustained human presence in the Chernobyl exclusion zone in Ukraine has led to a flourishing of wildlife in the area. Humans, however, would presumably prefer not to abandon ecosystems throughout the world, even in the face of evidence that their presence can be even more harmful to nature than massive radiological contamination. Therefore, humanity has no choice but to draw upon the hard sciences and other sources of knowledge, gain inspiration from the humanities and traditional practices, leverage its institutions to act collectively, and make choices at the individual level. Humanity can destroy nature, but it can also coexist with it and even help to restore it.

Thinking about the Environment through Culture: A Reflection